The Avengers: The Bendis Years: Avengers Disassembled or Revisiting my Comic Past (Spoilers)

Today I got a weird idea. A really strange and weird idea. As Brian Michael Bendis started to rise through the ranks at Marvel I was a little hit or miss on the guy. Then he took over Avengers and I became way more miss along with many other people in the comic store I used to go to. Oh my goodness was I ever one of those that ranted about along with others of the period. It’s why I trended towards DC Comics for a long time as well and didn’t tread far into Marvel waters for a good period of time. In recent years I’ve started to dig more of what Bendis has done on Avengers and other books. I’ve found myself becoming a fan of his and now I’m looking back on his first story with the team, Avengers #500-503 and Avengers Finale or better knwon as Avengers Disassembled and the Epilogue. This was a story that really left Bendis and I at odds as again, this was a series that had gotten close to me so I barely could give it a chance. Now with a much more mellowed state of mind I looked at it again. It’s not perfect but now I have a different look at it. This story may have broken the Avengers back then but in Disassembling the Avengers, Brian Michael Bendis ended up setting the foundation to make the Avengers better than ever.

(Yes before we start there are going to be spoilers for a story eleven years old. I know these spoilers aren’t huge now but if you haven’t read it yet and curious to experience it for yourself, turn back now. Otherwise, on with the show!)

When Bendis first did Avengers Disassembled the sales on the series weren’t what they are nowadays. Back in June 2004 it was #25 with 57,085 books sold. Which isn’t too bad but probably not the numbers Marvel wanted for The Avengers. Which means Bendis comes in and sometimes you have to break a few eggs to make things better in the long term. Boy did he break a few eggs. Some of the deaths could have been handled better, Scott Lang got annihilated by a revived Jack of Hearts, Hawkeye got a weird death fighting The Kree, and Vision got ripped apart by She-Hulk. Add in Ultron bots, and Tony Stark getting a weird drunken feeling at a U.N. Conference and destroying Avengers Mansion, yeah he broke things pretty handily. Though I did enjoy David Finch’s work on this overall, the Vision getting ripped apart by She-Hulk in full rage mode was a powerful visual. I remember people being so mad about all of this, I remember it well. I remember the reveal of all the chaos with The Avengers being caused by The Scarlet Witch, I’ll say that it was an insane twist. She had been around so long and through so many versions of the team, even on the West Coast Avengers, and no one would ever expect the villain to be her. It’s actually heartbreaking when you learn the reason why so she did a lot of damage but it rips your heart out when you learn why she did it. 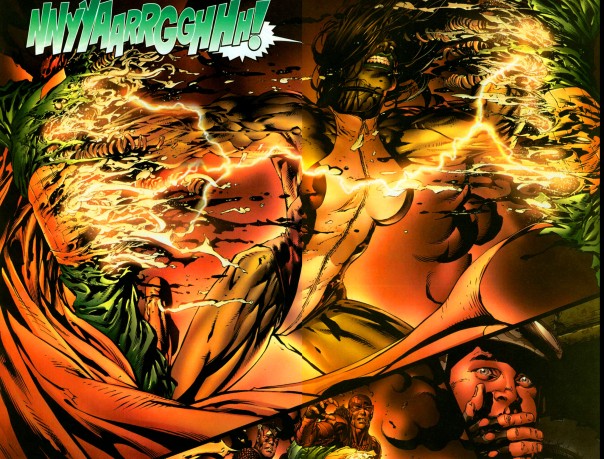 It’s a lot of shock and awe in the coming leading up the Scarlet Witch reveal. At this point though The Avengers were in rough shape anyway so Bendis got leeway to break things apart. I see every single reason why people loved and hated this story. Bendis didn’t hold anything back and wasn’t afraid to kill some darlings in the process. See the fun part about reading this on Marvel Unlimited is how furious people were in the letter pages, they left the letter pages in there. People were not happy at all and they weren’t shy with their feelings. I remember the comic store chats and it did influence me in not giving the book a fair shake or at least a more even handed look. In reading this with a more I guess you’d call it mellowed mind and new eyes, I did enjoy this story even understanding everything that ticked people off.

I did enjoy Avengers Finale as it summed up all of the Avengers history in one big story. See I never felt in the entire story that Bendis was disrespectful of the Avengers, far from it as Bendis was showing here that he loves The Avengers. By doing Avengers Disassembled the way he did, he got a lot of interest for the team and by breaking it got to build it into something different. Avengers Mansion was gone and now the team could become something else and Bendis was more or less telling people to hang in there and see what happens. To this day the Bendis run on Avengers is a divisive force among fans of the team. Yet in a way he’s downright reverent to the old teams but he knew to get it into new direction, he had to break a whole lot of eggs to get there.

That’s why I’m going to read the entire Bendis run on The Avengers. All of it from cover to cover. I’m going to do it by storyline and by the way, yes there will be spoilers. This is my own personal journey here. Feel free to join me on it, leave a comment, talk to me on twitter, let’s have some fun with this. Avengers Assemble as soon The New Avengers shall rise in my journey through The Bendis Years of the Avengers begins.